Shari'a in Egypt's Constitution: Leave it there or Take it out?

One of the problematic issues about the Egyptian constitution, currently under renovation, is Article No. 2, stating that the "principles of Islamic Shari'a are the principal source of legislation" in Egypt.

The article was introduced in the constitution few decades ago, during the time Sadat was appeasing the rightwing religious group in an attempt to stifle liberal secular groups, particularly leftist 'Nasserites' who continued to believe in the economic and pan-Arab policies of Nasser, Egypt's previous president.  Sadat's efforts were part of his attempt to look western-leaning, as he distanced himself from the Soviet Union.
Egypt's population is about 90% Muslim- an overwhelming majority.  From a practical point of view, Article No.2 was very unlikely to add much to the Islamic tendencies in legislations if the Muslim population elected to implement Islam inspired laws.  But since elections and the Egyptian parliament were a joke during the time of Sadat and Mubarak, the article practically meant absolutely nothing.

The ruling presidency/dictatorship/gang has always hand-picked who gets elected, and what bills are put forward before the parliament. They also controlled the judiciary and it was unlikely that any of their immoral political and economic policies would be challenged in the Supreme Constitutional Court for being 'anti-Islamic'.
Under the slogan of 'Islam is the main source of legislation', Egypt government allowed and ran gambling casinos, government-run alcohol and cigarette manufacturing facilities, and allowed nude beaches.  More importantly, the government routinely detained thousands of political prisoners, including moderate Islamic leaders, killed thousands in a pretend war against extremists, and willingly participated in the US extreme rendition programs to torture its own citizens.  The 'Islamic-based' government appeased Egypt's major enemy, Israel, with long-term commitment to export Egyptian natural gas at a fraction of its international rates.  They faked election results, abolished all forms of oversight by the people, and literally stole every penny they could get their hands on from the starving people with no fear of any accountability.
Regardless of the appropriateness of any of these specific policies, none of these acts would have been found unconstitutional in court in a democratic country whose 'main source' of legislation is Islam.  Thus, in reality, Article No. 2 of Egypt's constitution was dead words that bore no meaning in practical terms.  Other than the appeasement factor, this was not harmful, even though it was not helpful either.
As a Muslim, I believe that Islam, especially the words of God in the Quran, is the major source of inspiration and morality for me.  I think that true Muslims should look at the words of God as their guide to the way they should behave and live.
Yet, I am totally opposed to including an article in the constitution to make Islam the main source of legislation.
My reason for that opinion is that no one can tell you exactly what that inclusion in the constitution means.  And considering how the political scene is changing in Egypt, the judiciary would be in a very difficult position and would be overwhelmed by challenges to a lot of laws and social norm of Egypt under the pretense that they 'contradict Islam'.
Many Muslims and non-Muslims are not aware that the word Islamic Shari'a refers to a vague and huge body of legal and semi-legal opinions that was mostly derived by human beings long after Prophet Muhammad, peace be upon him, died.  Many of those so called Islamic laws were designed to fit the needs of particular societies and times.  They often reflected the power struggle and balance between different political groups.  Frequently, opinions reflected the desire of the rulers to stay in power, and the laws were thus slanted mostly towards dominant and undisputed control of the rulers with very few rights and safeguards for individuals to change the political scene or resist an oppressive regime.
If anyone disputes my opinion, they should read about early political Islamic dynasties and their relationship to the clergy at those times.  If that is too much effort for some, I suggest a quick Google search to see the plethora of conflicting political edicts coming from Saudi Arabia regarding all the recent turmoil in the Arab world.  For example, it was religiously OK to demonstrate against Libya's president, but Not against Saudi or Bahraini rulers!
Most of those who 'demand' the application of Shari'a law in their majority-Muslim countries would NEVER accept to live in any of the 'other' countries that claim to apply the Shari'a law, for example: Saudi Arabia, Somalia or Taliban-time Afghanistan. Moreover, for most of them, living under 'atheist' rule would be preferred to living under Shari'a laws in a Shiite Muslim state like Iran, a country that admittedly relies on Islam as the main source of legislation.
This points to a simple thing: the so-called Islamic laws are NOT a uniformly or unanimously accepted set of laws by every Muslim.  So why would anyone accept anyone else's version of Islamic law in preference to their own?
Many of those who demand keeping Article No. 2 in Egypt's constitution think that their version of Islamic Law would eventually be the correct one and that it is better than any other version that has been applied so far in any of the countries mentioned above.  But for a large number of the supporters, Article No. 2 is symbolic, almost like the flag of the country, nothing more and nothing less.
As democracy spreads in Egypt, with a freely elected parliament and an independent Supreme Court, Article No. 2 could be used legitimately and illegitimately.  But legitimacy will only be in the eyes of the beholder.
We may find challenges to government-run gambling casinos and liquor factories, or to exporting gas to Israel, which are good challenges in my eyes (for strategic and social reasons other than Islamic law).   But Article No. 2 could also be the basis for the challenge to women's driving and travel rights, or girls' education, freedom of assembly and speech, and even to the right for demonstrations and protests like those that brought freedom to Egypt. 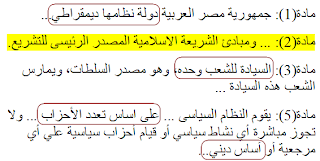 A more sinister scenario could also be a challenge to Articles No. 1, 3 and 5 of the constitution stating that the political regime I Egypt is a democratic one (No. 1), and that the [Egyptian] people are the only source of sovereignty and authority in Egypt (No.3).  This contradicts some interpretations of the man-made Shari'a law as implemented in the past and by some governments (e.g., Saudi Arabia and Iran), and as expressed consistently by Wahabi and Salafi groups.  Those governments and groups recognize political sovereignty as being exclusively in the hands God using their own interpretation for what God really wants.
Salafi groups could also object to and challenge Article No. 5 stating the multiparty nature of the political system and imposing constraints on establishing political parties with exclusionary religious clauses (e.g., Muslim- or Christian-only membership).
One can only begin to imagine the kind of trouble that would face Egypt if a challenge to such key articles is mounted, even if the challenge is based on one particular interpretation of Shari'a by fundamentalist groups.  Who would want the Supreme Constitutional Court to have to face the possible incoherence of the articles of the constitution, or the unconstitutionality of key articles?
Playing with religion is worse than playing with fire.  Many great changes in human history have occurred under the auspices of religions.  But a lot of the horrors in human history have also been committed because of the strict control by those same religions and because of the unique (i.e., odd) and political interpretations of those religions by beneficiaries of particular interpretations who valued money and power more than they valued God.
Religions are meant to enlighten and improve humans so that when these humans are exercising their rights as citizens, they can make moral and responsible decisions. Educated citizens who care about religion should learn enough about their religions to help them make proper decisions when their input into politics and decision making (e.g., in elections and referendums) is needed.
Clergy should stay out of political involvement. They should not rule, neither explicitly nor insidiously, by inserting religious clauses in political and supreme laws of any country.
It will eventually be to the detriment of the society and to religion itself.
Khaled
Posted by Khaled at 11:12 PM