Crossing the line for sake of justice

I came across this on a very decent Israeli blog called +972 Magazine that Michael W, and occasional reader and commenter on this forum has brought to my attention few months ago.

This exemplifies the inadequate recognition of the beautiful human beings (in this case, Just and peace loving Jews and Jewish Israelis) who cross the line of tribalism and religious clannish tendencies to seek and support justice for everyone.

My deep respect and admiration to people of all faiths and ethnicity whose universal sense of justice makes the world worth living in.


Something caught my eye when looking through photos on The Atlantic of the Nakba day demonstrations which engulfed the West Banks and Israel’s border areas last Sunday.
Image 16, reprinted below, carries the following caption: Two Palestinian men struggle after being overcome by tear gas fired during clashes with the Israeli police on May 15, 2011 at Qalandiya checkpoint near Ramallah, West Bank. (Uriel Sinai/Getty Images)
Actually one of the men is an Israeli from Tel Aviv named Jonathan Pollak. I suppose The Atlantic was not aware that Israeli supporters joined the Nakba demonstrations throughout the West Bank on Sunday. Maybe the editors have not heard of the Israelis that have gone to jail or been injured resisting their country’s repression of unarmed Palestinian demonstrations. Perhaps they should have a look at the definitive account of the joint struggle and the new Israeli left which Noam Sheizaf and I wrote for the Nation in March 2011.
I think that the photo is much stronger seeing an Israeli and a Palestinian side by side suffering from Israeli tear gas…don’t you? 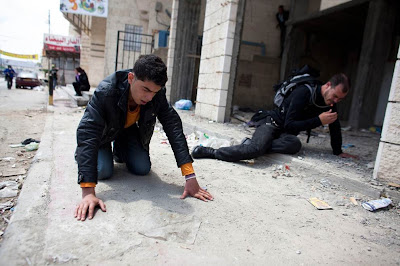 We have been very lucky in St. Louis to have many of those that cross those ethnic and religious lines, and dedicated their time, effort and money, and risked their lives in some cases to support causes alien to them, be it the Palestinian cause or the injustices against Muslims, Arabs, Blacks, Hispanic or any other minority in this area.
May God bless them all.

Check the rest of the impressive Photo-Essay by the Atlantic on Nakba Day protests (May 15 2011) at the borders of Israel and its 44-year occupied territories.

Local Activists and groups I am proud to know: