Hassan Nasralla and the Universal Nature of Selective Morality

Some events in one's life, as much as in humanity's conscience, are demarcation lines where what is right is clear, and what is wrong is clear.  Individuals and societies decide for themselves on which side of the demarcation line they would stand.  And their choice will be registered in the collective conscience of history. 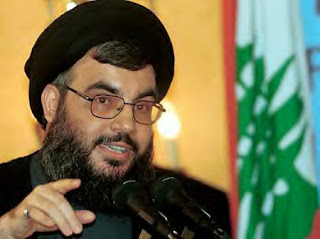 We are witnessing some of these events that have been evolving over the last few months.  And many, or most, of us - individuals and societies - are choosing sides based on anything other than transient interests and obvious material gains.  Yet, most of us, like to present the choice as a 'moral choice'.

The latest in the long line up of  'selective and expedient morality' is Sheikh Hassan Nasrallah, leader of the Lebanese resistance group Hezbollah.

In the middle of the blood shed of unarmed Arab and Muslim Syrians seeking a glimpse of freedom from one of the most inhumane and police regimes in the Middle East, the Syrian Baath Dictatorship, in the middle of this, Hassan Nasrallah come out to align himself with the oppressors in Damascus.

Hezbollah urges Syrians to back Assad regime
Hezbollah chief Hassan Nasrallah on Wednesday urged Syrians to back President Bashar al-Assad while calling for the rejection of sanctions imposed on Damascus over a deadly crackdown on pro-democracy protests.
...
"We call on all Syrians to preserve their country as well as the ruling regime, a regime of resistance, and to give their leaders a chance to cooperate with all Syria's communities in order to implement the necessary reforms," he said in the speech broadcast by his party's Al-Manar television.

Syria has been a strategic supporter of Hezbollah in the latter's fight against Israel, although it has always seemed comical to me that the syrians 'support resistance' in Lebanon, and yet they are DEAD SILENT about their own Israeli-occupied and annexed Golan Heights.  I always joked to my friends that anyone born after 1973 in Syria would not even realise that part of their land is under Israeli Occupation: no slogans, no verbal hostility against Israel, no propaganda toward liberation, and no effort for any international action to help bring the issue to the forefront of world politics.


Palestinians, with a lot less material and logistic capabilities than Syria, have managed using a variety of tactics and strategies to make the Palestinian issue a living breathing international issue gaining supporters everyday, and terrifying Israel's propaganda machine.

And while Syria was 'supporting' Lebanese resistance against Israel, the Syrian government has been more interested in tightening its grip on its own people, and building up great military capability not to liberate the Golan, but to be ready if and when its people come to live and demand basic rights as humans living in the 21st century.

Hassa Nasrallah definitely knows that.  And, yes, his group needs syrian support to maintain its deterrence against Israeli aggression.  But over the years, Lebanese resistence also grew to be a symbol for many Arabs and freedom lovers; a symbol of a people's movement that is capable of confronting an immoral and brutal hegemon like the Israeli forces.

Nasrallah should have worried about the revolutionary purity image of his group as much as he worries about his arms supplies.  But he did not.  He supports Palestinian resitance, mostly morally and possibly to some extent materially, verbally supports and profusely praised Egyptian revolution and Bahrain uprising, and when it came to Syrian people's revival he took side with the oppressor.

What a shameful deed.

Having been considered for a while as the only Arab leader with any sense of strategic thinking, he could have said the right thing to the unarmed Syrian resistance warriors, gave the Syrian government the right advice, and also accknoledged and highlighted the hypocritical and morally selective stance of the Western governemts on Middle East issues.

But he did not do the right thing, and he would be ashamed of his stance for years to come, and regardless of the outcome in Syria.

I am picking on Nasrallah not becuase I think he is worse than the equally hypocritical or 'morally selective' Gulf states and their clergy, Western governments and their fake interest in human rights and democracy, or Israel - the 'oasis of democracy' with its horrendous immoral strategies and tactics against Palestinians and Israeli Arabs -  showing off  Israeli 'pretend love and support for freedom and independence for Iraqi Kurds, Darfur Muslims or South Sudanese Christians

They are all hypocrites and only aim at maximizing gain for themselves, but Nasrallah was considered different by many.

Selective morality seems to be the most universal of  human qualities.

Khaled
Posted by Khaled at 8:58 PM