Organised Religion: Never fails to disappoint (at least in Egypt)

So far the popular uprising on January 25 has not been  effective in changing government structure or policies.  But it is still a major landmark in the history of political protest in Egypt. The extent of organization, the communication technology involved in managing it, and the definite involvement of may women in it, with and without Islamic head cover, have all been remarkable (the photo to the right borrowed from a blog by young Egyptian woman who is also a good writer).

I pray that the outcome fulfills at least some of the hopes of the Egyptian people, And more importantly, I pray that its success, partial of complete, will inject the Egyptian street with the sense of empowerment and pride that makes future hopes easier to achieve. 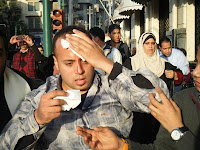 But many things have not changed, and unlikely to: the brutal government security forces response, the total lack of coverage by major Egyptian media outlet, the shut-down of communication tools (e.g., Twitter) by the government, the always the disappointing response of the American patron of the Egyptian governments, and more importantly, as the title implies, the response of the clergy: Muslims and Christians.

The Muslim Brotherhood - the largest block of political/activist groups in Egypt - came out with a lukewarm statement that it is under threats by the government, and that it will not 'officially' participate or demand that its followers participate in the events, but that it leaves it to the individual members to decide what to do (الإخوان تؤكد مشاركتها بشكل رمزي في المظاهرات.. والعريان: ماحدث تحرك شعبي 100% | الدستور ).

The government-paid Islamic institutions 'scholars', represented by Al-Azhar University faculty and the Supreme Council of Islamic Affairs members, came out with lame statements opposing the events and using ridiculous 'religious arguments' that are not worthy of even second grade student (علماء دين: قتلى المظاهرات ليسوا شهداء ).

The response of 'official Islam' in Egypt is not new or surprising.  But considering the status of Christians in Egypt, and the extreme unhappiness with discrimination, primarily by the government, the Egyptian Churches response was, in my opinion, the worst.  Coptic individuals  and other Christian commentators in Egypt also expressed unhappiness for the Churches official opinion.

Church leadership (Coptic, Catholic and Anglican), as well as key figures in Christian non-religious leadership in Egypt (sadly, including Christian human rights activists!!!!) have issued instructions to Egyptian Christians not to participate in the events of January 25 (out of 'love for Egypt', as per the statement), and to stay home.

The opinion was expressed not only in publicized statement, but in churches as well, as stated in the articles.

The logic that clergy (regardless of religion) used to justify submission to oppressive rulers has not changed for centuries.  And clergy has ALWAYS been a useful tool for oppressors everywhere for centuries: from the Jewish establishment in Jesus time in Jerusalem  to Omayyad and Abbasid dynasties, to the Holy Roman empire in Europe, and all the way to slavery US and Apartheid South Africa, Saudi Arabian monarchy, Iran (and modern day orthodox Jews in occupied Palestine)

I do not expect Liberation Theology to make inroads on the religious scene in Egypt, but less explicit expression of submission to oppressors is not too much to expect from 'men of God',  Check these quotes for a taste of their 'Holy' logic

The thoughtless sheikh 'forgets' to mention that the "bloodshed, death, and detention of young men and women" are committed by the government that he conveniently absolves of responsibility while he dumps the responsibility for the evil on those that are protesting the evil.

Translating more of the so-called religious opinions of those clergy - Muslim and Christian - would raise my blood pressure even further (but readers are welcome to check the articles and translate their favorite quotes as comments).

And I would rather translate a religion-neutral comment by a reader that seems to have dignity, to love liberty and to love his country:

اعتقد ان المسيحين مش هايفرق معاهم الكلام ده , زى ما المسلمين مش هايفرق معاهم كلام الشيوخ اللى طلبوا عدم الاشتراك فى المظاهره لاننا كلنا (مسلمين و مسيحين ) عارفين انه الناس ده من ديول النظام و بتاخد تعليماتها من امن الدوله مش من كتاب ربنا. المصريين فهموا خلاص و عرفوا السكه و ناويين يمشوها للاخر.  نتقابل فى الشارع ان شاء الله
"I think Christian would not care for those Christian clergy opinion as much as Muslims would not care for Muslim clergy opinions.  We all, Muslims and Christians, know that they are part of the regime.  They get their cues from security apparatus, not from the words of God.  Egyptians finally got it, and they know the way.  and they plan to  go all all the way.  See you on the streets, God willing."

I think that reader is too hopeful.

But it does not cost much to hope, and to pray for hopes to come true.

Links (of articles mentioned above and few other relevant articles):

Addendum: Links and quotes added after the initial posting date:


"However, leaders of the Coptic diaspora have welcomed the nationwide protests calling for social, economic and political reform. Michael Mounir, head of the US Copts Association, disapproved of churches calling for non-participation in the protests. He said that protesters’ demands are the same for all Egyptians as they include dissolving parliament and other political and social demands."